About console configuration and roles

I deployed the Nebula Graph services with Docker Compose, as described in this article.

When the last command docker run --rm -ti --network=host vesoft/nebula-console:nightly --addr=127.0.0.1 --port=3699 is run, the connection to the graph service is successful. But I found something weird when I granted a role to a user.

For example, I created a space named test1 and a user named user2, and granted the GUEST role to user2 in the test1 space. Then I connected to the graph service by running this command docker run --rm -ti --network=host vesoft/nebula-console:nightly --addr=127.0.0.1 --port=3699 --u="user2" (The --u="user2" configuration is from the “Console Configurations”. I hope it is right). When I ran the SHOW ROLES IN test1 statement, it works - only user2 and its role are shown. But when I run the CREATE TAG team(name, string) statement, it was supposed to fail, but actually the tag was created. According to the “Built-in Roles” article, a guest must not write schema. So which one is right? 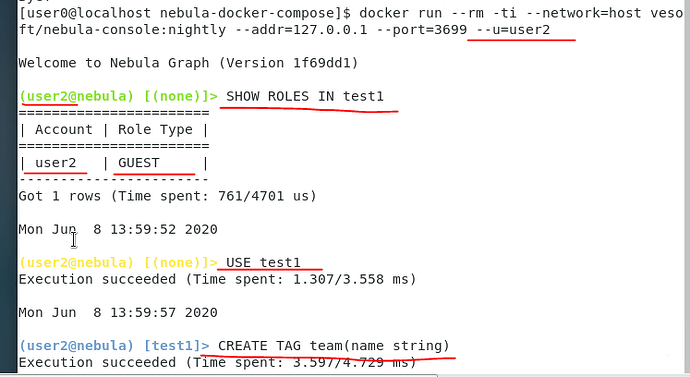 Thanks for asking. Did you enable the authorization parameter?

Set the enable_authorize parameter in the /usr/local/nebula/etc/nebula-graphd.conf file to true to enable the authorization.

Do remember to restart the services after modifying the configurations. Let me know if this helps.

Before the enable_authorize configuration, granting a role to an account cannot work well?

Yeah, I changed the enable_authorize configuration and the granting role works. So many thanks.

But I think I may find another thing.

I changed the role of the root to GUEST. Then today, when I logged in the console as the root account, I can still create user and seems granting role does work, but when I want to show all the roles in the space, I cannot see anything but the role of root, as shown in this screenshot. I don’t know why, but I think you may want to know this information 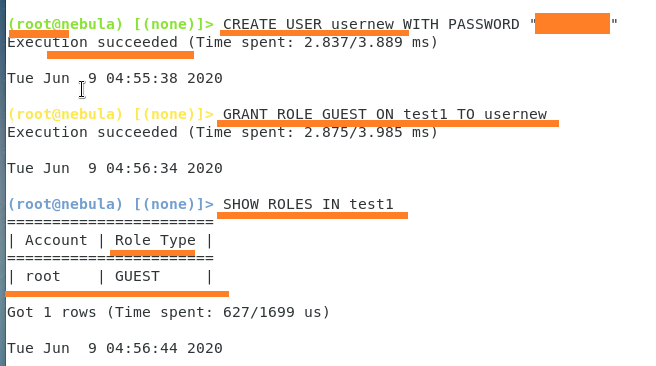 I suspect the problem is caused by create users or grant role when enable_authorize is turned off. Because if enable_authorize was turned off, authorize operations are not validated, which can lead to metadata confusion. so clean up these invalid data through REVOKE statement as well.

Got it. Thanks so much.